The IT Service Desk is available for all your IT questions and problems. Click on the link below for contact details.

Are you interested in IT and in need of a job next to your studies? Send your application to the ICT Servicedesk via werkenbijsupport@uu.nl.

Back
Target audience: Staff and Students

What are the differences between a public and a private team?

A public team is findable for all UU users.

Double click left in the Teams menu on ‘Teams’ and click on ‘Join or create team’ at the top right corner. With the search bar you can search for public teams. Every user can join such a team without approval of the team owner.

If a team is public then the SharePoint site of the team is public as well. This means that all UU users have access to this site. All documents and recordings of Teams meeting that were made within this team are publicly available for all UU users. Be aware of this if you’re using a public team.

A private team is a closed environment. Only people who are added to the team by the team owner have access to the team and all of the related content on the SharePoint site of the team.

Is my team public or private?

Org – this indicates the team is public

Team – this indicates the team is private

How do I change the privacy settings of my team?

Open your team and click on the three dots behind your team name. Choose for ‘Edit team’. Below ‘Privacy’ you select the desired setting. Click on ‘Update’ to apply.

Where will my Teams recordings be saved?

Recordings made in Teams of meetings will from August 7th 2021 be saved in SharePoint or OneDrive instead of Stream, the video service of Office 365.

Recordings of old meetings that are already in Stream will remain there for the time being. In the future, these recordings will be migrated to SharePoint or OneDrive.

What are the differences between Team owners, member and guest?

Every member in Teams has a role, and each one has different permissions.

The following table shows the capabilities available for each role: 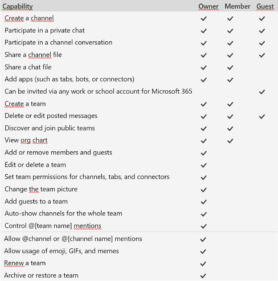 For the most recent version of these capabilities per role, check out this Microsoft page: https://support.microsoft.com/en-us/office/team-owner-member-and-guest-capabilities-in-teams-d03fdf5b-1a6e-48e4-8e07-b13e1350ec7b?ui=en-us&rs=en-us&ad=us

Please note: File permissions for members and guests reflect whatever your admin has set in your SharePoint settings. These can only be changed by your admin.

What should I do with mail from Microsoft about the expiration of a group?

You might, as a user of Teams, receive an email from Microsoft talking about the expiration of a group.

Such a mail comes from msonlineservicesteam@microsoftonline.com and has as subject “Action Required: Renew [group name] by [date]”. 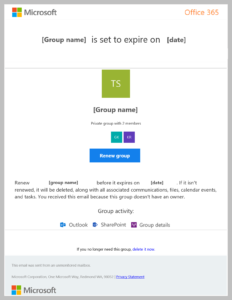 The image above is an example. In the actual mail, “[group name]” will be replaced by the name of the group it concerns and “[date]” by the relevant expiration date.

What is meant with a “group”?

The term “group” is derived from “Microsoft 365 groups”. Technically this is a service that enables Office 365 users to make use of the various Office 365 components like Teams, SharePoint and Exchange Online (email). The service is connecting the components with each other and is taking care that the users have the correct authorizations on the various components. For this reason a so called “group” is created under the hood when for example a team is created in Microsoft Teams.

Why do I receive this email?

In 90% of the cases you receive this email because you’re a team owner in Microsoft Teams. The group name that is mentioned in the email is probably recognizable as team name.

What do I have to do with this email?

If the team (or one of the other mentioned objects above) must be retained then one of the owners should click on the Renew group button.

What will happen if I do nothing with this email?

The owners have 30 days to execute this action. If the owners do not respond during this period then after this period all of the data (like the team in Microsoft Teams) will be deleted, including all documents within.

Owners will be notified two more times. The first time is after 15 days and the second time is after 29 days. If meanwhile no further action is taken then the group is deleted automatically on day 30.

A deleted group (including the team in Microsoft Teams and all documents) can be restored during a period of 30 days after deletion by ITS. If the group is not restored during this period then everything is deleted permanently.

At the bottom of the email you’re also able to delete the group directly by yourself.

Can I expect more emails like this in the future?

Here is a list of useful shortcuts for Teams

Before and during a meeting

People in my meeting can't hear me, what can I do?

If people in a meeting can’t hear you, you might be muted or you might not have configured your mic correctly. 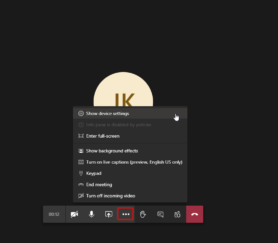 My speakers seem to be muted during a meeting

When you want to start a meeting from a channel you can use the “Meet now” button: 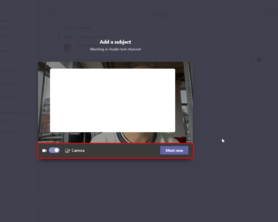 By default, your speaker will be muted. You can change this while you’re in the meeting by click on the ***  and go to the Device settings.

Here you can change your device settings and un-mute your speakers. 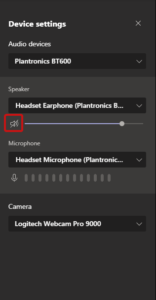 My microphone doesn't work when using Teams on my Mac

If you’re using a Mac and you’re having trouble getting your microphone to work, you might need to change one of your privacy settings.

Here’s how to check:

For example: after an update of the OS or application some settings might have been changed that make sharing content impossible.

To solve this you can try the following:

Adding people from outside the UU to a meeting

If you organize an online Teams meeting you’re able to invite people from outside UU via their email address. These guests are only invited to participate in this specific meeting. Here they can make use of audio & video, share their screen and make use of the meeting chat.

To invite guest you can also share the invitation link of the meeting. You can send this link via email, Whatsapp or publish it somewhere online. To get the link, go to the meeting and copy the URL behind ‘Click here to join the meeting’. 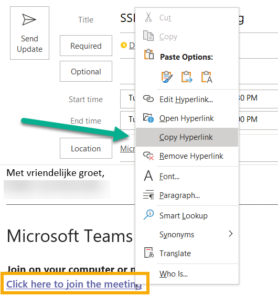 Only if the guest is using an email address that he’s already using for Teams (for example in the own organization or as a guest in a team) then after the meeting he’s able to read the chat history. This chat can also be continued.

Joining an online Teams meeting never automatically results in access to any of the teams. It is also not necessary to be a member of a Team in order to participate in a meeting.

If you want to know more about guest users in Teams, check out this manual: Teams: logging in as a (guest) user after receiving an invitation email

How many people can I invite to a meeting?

There are some things that are good to know when your meeting might go over the limit:

How can I change the settings of a meeting with guests/colleaugues?

Once you’ve created a meeting you can change several settings before you begin (or during). You can do this by going to the meeting in Teams and clicking on ‘Meeting options’.

You will see the following window open in your browser: 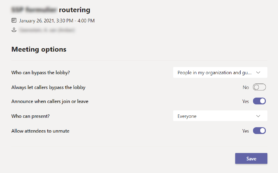 By default the settings are as in the image above, but you can choose to, for example, not make people wait in the lobby or choose who is allowed to present. The last option allows you to choose whether people can unmute themselves or not. If you choose ‘no’, noone can speak during the meeting by unmuting themselves.

How can I add someone from outside of the UU as presenter to a live event?

When organizing a public live event in Teams you can add people from outside the UU as presenters (or producers). It can happen however, that this person wants to join this event but is unable to choose the role of presenter.

This might be due to the different ways you can join a live event or meeting as a guest. It is different to be a guest in a Teams or in a meeting/live event.

After adding the guest to the Team, he or she will have to log in and join again. Then the guest should be able to present.

Please note: the most important thing is that someone needs to log into the web browser after being added to a team.

For more information about how to join a Teams meeting or event you can check out this manual: Teams: logging in as a (guest) user after receiving an invitation email

How can I create a public live event?

You have three options for organizing a Teams event: 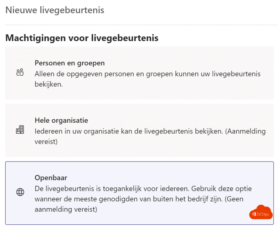 You need extra rights to be able to create a public live event in Teams. These rights can be granted temporarily by the Office 365 team.

You can request these right by contacting the Servicedesk and supplying the following information:

I cannot chat with someone during a meeting

In a Teams meeting it’s possible that the chat functionality is unavailable. This can be noticed in two different ways:

When can I make use of the chat functionality?

In the following situations you can make use of chat in Teams meetings:

*A “UU user” is a user with an @uu.nl or @students.uu.nl email address.

A non-channel meeting is a meeting that is scheduled through the Outlook or Teams calendar.

Chat is always available in this type of meeting.

A channel meeting is a meeting that is scheduled in a Teams channel.

For an optimal Teams experience it’s recommended to add the attendees as members to the team as much as possible and to make use of the desktop application.